The Boeing 737-700, weighing as much as 154,500 lbs, can lift off effortlessly from a runway and remain in the air when fully loaded. How is that possible? To understand, we must learn about the four forces that make flight possible. 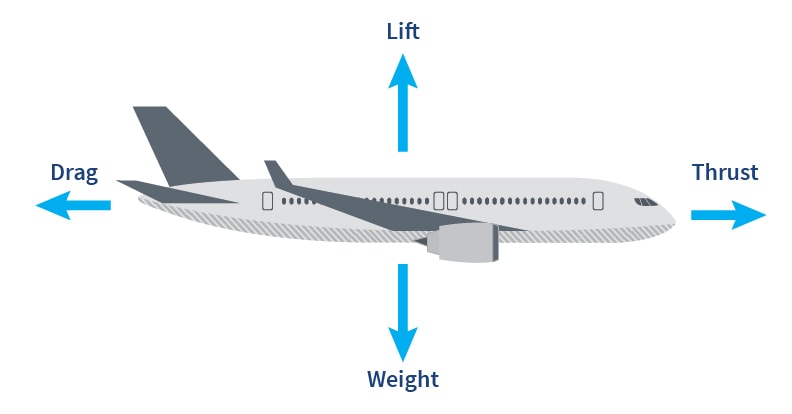 Airplanes require propulsion to move forward, a force that’s known as ‘thrust.’ There are two ways that planes can create thrust. The first is using propellers, which spin very fast and push air backwards. The second is using jet engines, which are shaped like tubes and uses heat from burning fuel to push gasses out of the back of the tube at high speed. When you’re in an airplane that is taking off you feel like you are being pushed back into your seat. Thrust is the push forward that is created by the airplane’s propellers or jet engines pushing air back.

Air pushes back against an airplane as it moves forward – the force of the air being moved is known as ‘drag.’ To overcome this resistance, an airplane’s forward thrust must be stronger than the forces trying to keep it in place. Other factors like speed, the stickiness of the air, and even other gas molecules in the atmosphere all affect drag. Planes are designed with a sleek body shape so there is as little drag on the plane as possible.

Engine thrust gets the plane moving forward, but it isn’t what raises an airplane off the ground – that heavy lifting is done by the shape and angle of an airplane’s wings. Wings are attached to an airplane at a 5-10 degree angle. They’re flat on the bottom and curved on top. As air hits the airplane, it is deflected around the wing, stretching air molecules that rush over the top. This leads to lower air pressure above and higher air pressure below the wing - a difference in airspeed that helps lift a plane up.

To lift off, airplanes need enough thrust to overcome the weight of gravity that is keeping them grounded. But weight isn’t an issue during take-off alone – as an airplane burns fuel throughout a flight it becomes lighter, subtly changing the weight distribution of the aircraft. Pilots must make constant adjustments during flight to keep the weight of the airplane balanced as its centre of gravity.

Whether it’s a small Cessna 172 or a massive Airbus A-380, aircraft typically take off into the wind, known as "headwind," instead of with it, which is called "tailwind." Why?

Because taking off into the wind increases the lift and allows pilots to achieve a higher altitude in less time and with less speed. Likewise, landing against the wind makes it possible for slow approach and better control for the flight crews. Crosswinds (winds that are perpendicular to the aircraft) and tailwinds make flying more challenging, and aircraft have maximum limits for both, depending on the plane, the airport and the conditions on the runway. If winds exceed those limits, the plane will not attempt a takeoff or landing. However, when in the air, tailwinds are advantageous making travel faster and fuel efficient.

Check out the forces of flight working to help this Airbus A330 take off in the winter!