Our growth directly corresponds to significant job creation and GDP growth in Ontario, adding to our importance as an economic engine for all of Canada. The area around Pearson Airport is the second-largest employment zone in Canada with more jobs than the central business districts of Montreal, Vancouver and Calgary.

Our economic impact extends to regions around the airport. For example, Pearson generates or facilitates: 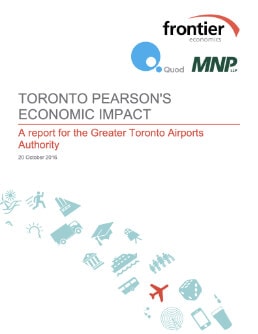